Thoughts on Classical vs. Chartres

There is an ongoing controversy as to which type of labyrinth is most effective (read: is best). While I wouldn't deign to say which one I like more, I recently discovered a rather seminal difference between the two which might make one more effective than the other - depending upon your spiritual point of view. Lets take a look at how one walks the Classical versus the Chartres:


I wonder if which labyrinth you are drawn to

depends on how you see your relationship with your Maker?

But first, the Firmament… 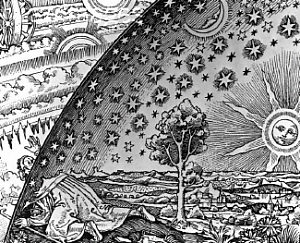 The Catholic Encyclopedia tells us that the notion that the sky was a vast solid dome seems to have been common among the ancient peoples whose ideas of cosmology have come down to us. Thus the Egyptians conceived the heavens to be an arched iron ceiling from which the stars were suspended by means of cables (Chabas, L' Antiquite historique, Paris, 1873, pp. 64-67).The Hebrews entertained similar ideas in numerous biblical passages. In the first account of the creation (Gen., i) we read that God created a firmament to divide the upper or celestial from the lower or terrestrial waters. The notion of the solidity of the firmament is expressed in such passages as Job, xxxvii, 18, where reference is made incidentally to the heavens, "which are most strong, as if they were of molten brass." The same is implied in the purpose attributed to God in creating the firmament, viz. to serve as a wall of separation between the upper and lower of water.

Lets start with the Chartres labyrinth. The seeker, on his knees, in the left-hand corner of the picture is kneeling in this physical reality, but there is that arc, the firmament, that separates the physical world from heaven. In this wood cut, the seeker has stuck his head and one arm through the firmament, and sees Heaven. Heaven is "somewhere out there." God is somewhere else other than "here." Omniscient, but not omnipresent. As a recent pop song said, "God is watching you, God is watching you, God is watching you, from a distance." God is transcendent. You go from where you are outward/upward to find God. (And usually, you gotta die before you can experience the One.)

On the other hand, the Classical type starts "out there" and brings the seeker in. The Deity of Choice is not out there somewhere, but inside. The Classical Labyrinths state by their pattern that God/dess is immanent. You can connect/experience the One whilst alive. S/He is In You.

Having made that distinction, I then feel that there is a possibility that aside from the fact that it is a Christian symbol, the Chartres labyrinth demonstrates Christian cosmology - God is out there, and if you want to find Him you have to start here and go out there. On the other hand, the Classical labyrinths are inherently more immanent i9n their outlook. God/dess is found inside, and everywhere. "All the Earth is Sacred, with every step we take."