The Gathering Earth Energies: An Interim Report
by Sig Lonegren

(If you have not read my intital article on the Benton Castle Labyrinth in the Summer Solstice issue of MAG E-zine, you might want to read it before you read this article.) 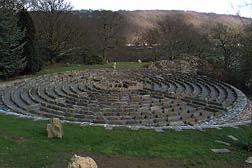 In the Summer Solstice issue of MAG E-zine, I reported my findings at the newly constructed Benton Castle labyrinth in SouthWestern Wales. Built by the owner, Mrs. Elizabeth Sulivan, this Chartres type labyrinth has demonstrated some fascinating properties. Elizabeth is an extremely competent dowser, and she dowsed it's location, orientation and the specific location of each stone in its walls. ( Labyrinth terms described) In April, I calculated that the major axis of the labyrinth and the concomitant orientation of the energy ley which exits out of the mouth of the labyrinth should align with the Winter Solstice Sunrise (this will have to be seen this Winter Solstice to be verified, but my measurements indicate that this should be the case).

Sig Lonegren and Elizabeth Sulivan on top of Benton Castle


But even more interesting, when Elizabeth first dowsed the location of the labyrinth, there were essentially no Earth Energies under the space it was to occupy; however, after its construction both a dome of water and number of energy leys (also called "e leys") were also drawn to it! The dome was initially noticed by Maj. Gen. Bill Cooper, President of the British Society of Dowsers, who is a friend of Elizabeth's. He was having lunch there (always a gourmet fEast) when he happened to notice that there was a dome of water under the dining room table, which had not been there when he had dowsed the castle on previous visits. To make it even more of a puzzle, the dome was apparently moving - towards the recently completed labyrinth! When I first visited Elizabeth several weeks later, the dome was in place, at the center of the labyrinth. But also, there were a number of energy leys Crossing there as well. The dome is yin, and the e leys are yang - thus making a complete circuit.

The energies at Benton Castle Labyrinth
as dowsed in April 1966


There have been other dowsers who have also noticed the apparent ability of new labyrinths, that were used regularly, to draw water to them - John Wayne Blassingame and Marty Cain, both good dowsers in the US - to mention two. Here at Benton, was the first time I had seen that energy leys were also drawn to the newly constructed space. Notice that there are two through e leys. One running along the major axis of the labyrinth and out the mouth. I call this the major axis e ley. The second through e ley runs from North to South. For me, North is the direction of Wisdom, so I think of it as bringing Wisdom in to the labyrinth, so I call it the Wisdom ley. The other two half e leys are a bit odd. At first, I thought that they were one through e ley, but they did not actually align. They were two earthing points. I had not seen two "half e leys" at a sacred site before, so I proposed at that time that this might be an interim stage of the energies "settling in," there might be some shifting still to come.

I recently returned to visit Elizabeth Sulivan at her home at Benton Castle. Once again, I found her to be a gracious hostess full of ideas, stories, and enthusiasm for her work in the areas of dowsing, healing and labyrinths. I was anxious to check out the energies at the labyrinth, so after another unbelievably good lunch, I headed down to do some geomancy.

The energies at Benton Castle Labyrinth
as dowsed in October 1966

After making sure my protection was working and checking in with the spirit of the place, with a handful of small rocks, I began to dowse with my L rods around the outer wall of the labyrinth, starting with the Major axis e ley that flowed out the mouth toward the SouthWest. I put a rock down in the center of the path at the mouth, and went on in a clockwise direction with my rods in the search position.

Elizabeth has constructed two relatively small partial stone rings - one on either side of the labyrinth. Just after I passed a tall stone in the circle nearest the castle, my rods went out indicating that the shorter end of the 'L's' were directly over the center of an energy ley/e ley. I put down another stone at that point. This was one of the earthing points that I had dowsed the last time. It was flowing towards the center, and it did not hit any of the stones in that circle. 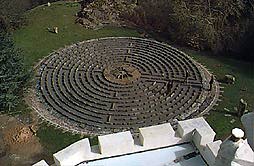 The labyrinth from the top of Benton Castle
Notice the people to the right at the mouth.
The walls that mark the end of the first quadrant of the labyrinth
come from the goal and point towards the castle
mark a new energy ley

The end of the first of the four quarters of this labyrinth is clearly marked in this labyrinth. Actually, an impressive alignment of walls coming out from the center clearly delineate each of the four quarters. It is ninety degrees from the mouth, in the NorthWest. To my surprise, my rods went out at this point, indicating a new e ley had come in. There had not been one there when I had dowsed in April! It flowed through the castle towards the center. I deposited another small stone, this one marking the center of this new energy ley. As I did not find another e ley on the other side of the labyrinth, I determined that this new one was yet another earthing point.

The through ley that had run North to South when I dowsed in April was still coming in from the North. Each of the Four directions can have meaning for those who learn to read Nature. It is entirely possible that each reader may have a slightly (or radically) different meaning for each of them. There is no "correct" meaning. It is what is right for the individual. For me, North has to do with Wisdom. Working with the Sun and the naked eye alone, one can tell East and West twice a year - given a level horizon, the Sun comes up due East and sets due West on both Equinoxes. South is the point on any given day when the Sun is at its zenith. With out tools, this is a good way to go blind relatively quickly. On the other hand, given a clear sky, on any night, if you live North of the Equator, by using the two pointer stars on the big dipper/the plough, you can find the North star, Polaris. Point at that star with your finger. Allow your arm to drop directly to the horizon. That is North. If you know where you're going, that's called Wisdom. I'm calling this e ley the Wisdom energy ley, because it comes from the North, and brings Wisdom into the labyrinth. I put a stone at that point.

Shortly after this Wisdom e ley, I came to the other end of the Major axis e ley. Another stone.

But it was the next e ley that I hit that really excited me. It was flowing away from the center. When I had been there in April, this had been an earthing point, going towards the center. I took a moment to walk to the goal of the labyrinth to dowse and follow this differently flowing e ley. At the center, my aurameter (an advanced Spring loaded dowsing instrument that you can get from the ASD Bookstore) bent slightly and went along to that first e ley clockwise from the mouth that I had thought was still an earthing point! It was as if the two e leys coming in initially as two distinct earthing point e leys were in the process of becoming one. But bent? I have never seen this before. One common characteristic of all leys was that they were straight - and here was a bent one! Another stone marked the center of that bent e ley.

I continued on around the edge of the labyrinth, and found the other end of the Wisdom e ley, and left a final stone there. Then on back to the mouth, and the Major Axis e Ley.

These findings change the way I have been looking at power centers for the last twenty-five years. I had always come down on the side of our ancient formothers and fathers locating their sacred sites on earth energy centers that were already there. In fact, I still suspect that for the most part, this was the case; however, there is no denying that new sacred spaces (at lEast labyrinths), when used with intention can draw the Earth Energies to them. And in that birthing process, the energies do things that one just doesn't see at long time sacred spaces.

I will be curious to see what happens when/if the major axis of the Benton Castle labyrinth aligns with the setting Winter Solstice Sun. My pendulum tells me that at that time, there will be a major burst of energy in to the labyrinth, and the bent e ley will snap into straightness. Unfortunately, I'll be in Vermont at the Winter Solstice, so I have asked Elizabeth to dowse what happens there for me, and I shall certainly check it out myself the next time I'm up there in Southern Wales, and write a further report about the gathering of the energies at a new sacred space.