This next full moon will occur on the winter solstice, December 22. This full moon occurs in conjunction with a lunar perigee (the point in the moon's orbit that is closest to Earth). The moon will appear about 14% larger than it does at apogee (the point in its elliptical orbit that is farthest from the Earth). The Earth is also a few million miles closer to the sun in the winter than in the summer. This means sunlight striking the moon is about 7% stronger. This makes the moon brighter. Also, this will be the closest perigee of the Moon of the year. (The moon's orbit cyclically changes shape.) All this means that it will be a super bright full moon, much brighter than usual. AND it hasn't happened this way for 133 years. This last time this happened, on December 21, 1866, the Lakota Sioux took advantage of this combination of occurrences and staged a devastating retaliatory ambush on soldiers in the Wyoming Territory.

So go out and look at the moon on the night of December 22.

This issue is dedicated to a geomantic look into the New Millennium. Each geomancer was asked to say where s/he saw geomancy going - even in to space. I did not read the other pieces before I worte my own, and I was heartened by the similarity of though the critical importance of Nature, and the central connection between geomancy and the spiritual path. I think these are thought provoking, and well worth the read.

At this time
when the Moon
comes as close
as she ever comes
to us,
May Her Light
bring you a
Happy Winter Solstice!

Beyond 2001, Contact & Apollo 13: The Dynamics of Space Revisited
by Nicholas Mann

Nicholas R. Mann is an author and geomancer who contrives to live in Glastonbury and Salt Lake City, Utah.. recently completed a book on the Druids, to be published by Llewellyn in March 2000. He has also written ISLE OF AVALON and THE DARK GOD. Both books also published by Llewellyn. See the MAG Bibliography for his other books.) He and I go back a long way together, and his views here are very appreciated.

Geomancy in the New Millennium
by Marty Cain

As an artist Marty Cain uses dowsing to research ancient sacred sites in Europe and America to discover what makes specific places sacred. Her work has enabled her to recreate that experience for others today. Her own artistic work focuses on creative placemaking, the integration of art and geomancy. To date she has created over 60 labyrinths in the USA and Canada from Prince Edwards Island, Canada to Kauai, Hawaii and from Lewistown, Montana to Austin, Texas.

The Unfolding of Geomancy in the New Millennium
by Patrick MacManaway 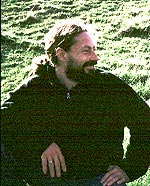 Patrick MacManaway is a geomancer with a background in healing and holism and a degree in conventional medicine. He is a jobbing geomancer both in Scotland and New England. It is a delightfully varied practice working with places very large and very small, domestic and commercial, public and private, pre-design and post-build. He works with labyrinths, healing sanctuaries, shops and schools, estates and gardens, energy mapping and balancing in buildings sick and sound, and in homes both happy and sad. Patrick is a partner in the development of the Mid-Atlantic Geomancy web site.

Geomancy into the New Millennium
by Sig Lonegren

Sig Lonegren is the webmaster of Mid-Atlantic Geomancy, with his partner Patrick MacManaway. He is also an author, teacher and active in his community in Glastonbury, England. His spiritual path has taken him through many different World Religions from Hinduism and the Native American path to Celtic and Indo-European Mythology to Biblical studies. He holds a M.A. in "Sacred Space," an interdisciplinary degree in archaeology, archaeoastronomy, sacred geometry, anthropology, and dowsing.