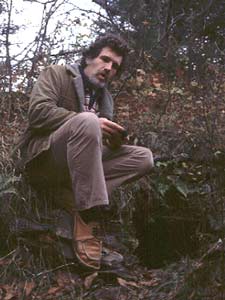 I learned archaeoastronomy from Byron Dix. He was a self taught genius who was the first person I knew who walked through the land feeling what was going on – “Oh, there must be something over there.” And sure enough, there would be a standing stone or some other feature.

He taught me Orthographic Projection, a valuable tool for telling where the sun would rise on a particular day at any latitude and elevation to the horizon. We spent many days out in the fields and woods of New England looking for evidence about the people who built the stone chambers and other lithic features. He came to the conclusion that most of them were built by Native Americans after the White man got there, and presented his proof in Manitou.

We both played guitar and we found that after not seeing each other for several months, we'd get together, and our guitars were more often than not completely in tune with each other! He passed on a while back. In my book (along with his partner, Jim Mavor), Byron is among the greats in American archaeoastronomy. He was a good teacher, and a good friend.