David Barron measures a very unusual (for New England) stone row here at Gungywamp Swamp. But it would be typical if found in Olde Englande in that there are two veins of water that crisscross like braids under each stone. David was the founder of the Gungywamp Society, and an early contributor to our knowledge of New England's enigmatic lithic material. 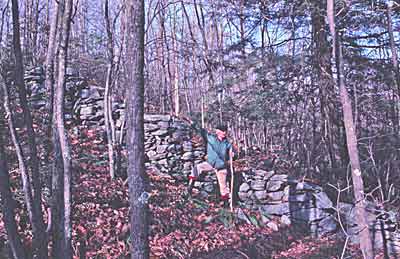 Here David points up hill on a perfectly straight stone wall. Usually one thinks of stone walls as enclosing something. This one starts down in a swamp and runs straight up hill. Many times walls like this were built to point to a significant astronomical event like the Summer Solstice Sunset.

Other Lithic Material in New England

There are many other kinds of stone constructions in New England and Hudson River Valley that continue to mystify many. Here are a few: 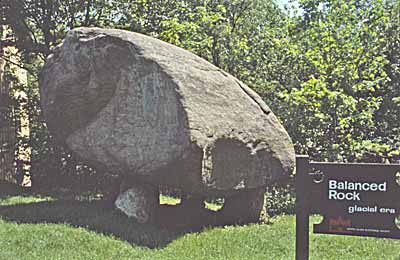 The sign says that it is a glacial erratic boulder. Not everyone agrees. Some call this the "North Salem Dolmen." This balanced rock resides in North Salem, New York (almost on the Connecticut border). Calling it a "dolmen" implies that it was constructed by foreigners. ("Dolmen" is a Celtic word to describe similar structures found on the west coast of Europe, but they were actually built long before the Celtic culture arrived on the scene, and the space under them was usually much much bigger - at one, a man could ride under it on his horse!) There are numerous similar "perched rocks" through out New England. Some are on bedrock, and their huge mass is held in to the air by relatively tiny cabbage-sized rocks - way too confined a space to be able to crawl under. 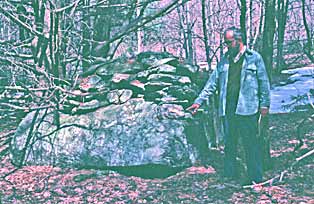 This is an incredibly neatly build cairn or stone pile on top of a much bigger boulder in central Vermont. Some farmers say today that rocks are Vermont's biggest product. Colonial European settlers had too many other things to do to take the time to make artistic piles like this. I think it is safe to say that there are hundreds of these tightly constructed piles sprinkled throughout Vermont and New England. 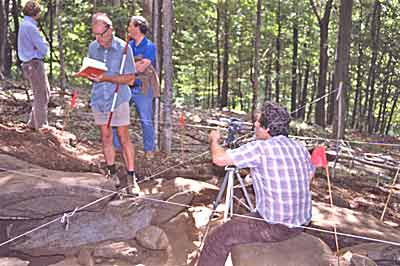 Archaeo-astronomers Byon Dix (with his back to us) and his partner, James Mavor (taking notes) did an enormous amount of field work all over New England (here,in the area of the Summer Solstice Sunrise notched stone (seen earlier in this section) at Calendar I in Vermont. In their book, "Manitou," they come to the conclusion that these structures were built by Native Americans - many after the arrival of the White colonists. Byron passed on unexpectedly. He was a teacher of many (MAG owes its awareness of Orthographic Projection to him). He was a good friend. 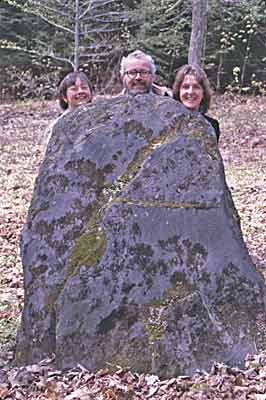 The Indian Stone near Montpelier, Vermont. This enormous stone, shaped like a slice of bread planted in the ground, leans toward the three intrepid Earth Mystery explorers standing behind it. It is called the Indian Stone because is is within sight of the Native American Council Tree in the next image. This stone is on an energy ley that runs to the Council Tree. 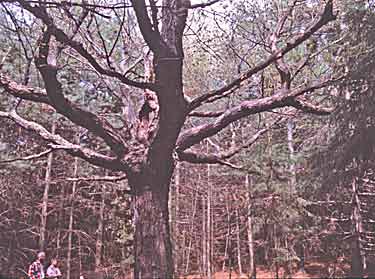 Council Trees, usually the biggest monarch in that area, are found throughout New England. The are characterized by many of their branches going out parallel to the ground, and then suddenly turning ninety degrees and going straight upwards - usually over a vein of underground primary water. These trees were used similarly to Moots or Tings in Britain - where different tribes could gather on neutral turf, hold council and resolve "moot points."

Regardless of what culture left us these stone remains, from comparing their interest in astronomy, the use of sacred geometry , and the Earth energy power centers that are found at these New England sites, we can be sure that these people were involved with what have become known as the Earth Mysteries. The female and the male. The circular stone on the left is in Lancaster, New Hampshire, and the somewhat phallic standing stone on the right is in Vermont near Calendar I.