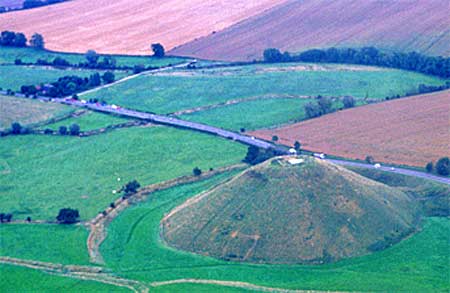 Sillbury Hill is a totally man-made mound -
the biggest prehistoric mound in Europe.
It is found in the heart of one of England's
most magnificent megalithic complexes - Avebury.
In addition to the stone circle, there is a magnificent avenue of stones,
and three early neolithic long barrows
dating back to at lease 3,500 BCE, and much more.
Actually, Silbury Hill is one of the youngest features
at Avebury dating to around 2400BCE.

A part of the Avebury henge, the ditch( henge) was up to 75 feet deep!
This is the largest stone ring in Europe - there's a villiage inside!