In the northern hemisphere, the Summer Solstice is the longest day of the year (near June 21st) when the Sun rises farthest in the north-eastern horizon, rises highest in the sky at noon, and sets farthest along the north-western horizon of any day in the year. The Summer Solstice marks the first day of the season of summer. The declination of the Sun on the (northern) Summer Solstice is known as the Tropic of Cancer (23 degrees 30 minutes north of the Equator). Another way of saying this is that on the Summer Solstice, a line drawn from the centre of the Earth to the centre of the Sun will exit the surface of the Earth through, the Tropic of Cancer. At noon on that day, at the Tropic of Cancer, the Sun will be directly overhead. On that day, at the Arctic Circle, an imaginary circle on the surface of the Earth at 66 degrees 30 minutes N Latitude, i.e., 23 degrees 30 minutes south of the North Pole, is the southernmost point of the northern polar regions at which the midnight sun is visible. (It also marks the northernmost point at which the sun can be seen at the Winter Solstice – about December 21).

"Solstice" is derived from two Latin words: "sol" meaning sun, and "sistere,"to cause to stand still. This is because, as the Summer Solstice approaches, the sun rises further and further in the north-eastern horizon on each successive day. On the day of the Solstice, it rises an imperceptible amount further northeast, compared to the day before. In this sense, it "stands still."

Many prehistoric sacred sites aligned towards the Summer Solstice. In Sweden, a number of inland Viking labyrinths are located towards the sunset on that day. This is also the case for the Serpent Mound in Adams County, Ohio. The jaws of that terrestrial serpent, and the major axis of the egg that it grasps in its mouth, align to that same sunset. Calendar II, and enigmatic lithic site in central Vermont has an alignment from an astronomical platform to a standing stone that points the eye to the Summer Solstice sun as it rises, rolling up the side of a hill. Of course, the most famous Summer Solstice Sunrise is at Stonehenge, on the Wiltshire Downs in southern England. On most years, thousands of people gather at this sacred site to celebrate Sun rise over the Heel Stone on the longest day of the year.

In ancient Gaul: The Midsummer celebration was called Feast of Epona, named after a mare goddess who personified fertility, sovereignty and agriculture. She was portrayed as a woman riding a mare.

MidSummer, June 24th, is celebrated by all kinds of groups. It is a holiday adapted by neo-pagans to celebrate the middle of summer. The origins of the holiday originated in Wales where the celebration of midsummer was practiced and is called Gwyl Canol Haf. Others call it Litha - which perhaps comes from the Saxons.

In some European traditions, the first (or only) full moon in June is called the Honey Moon. Tradition holds that this is the best time to harvest honey from the hives. This time of year, between the planting and harvesting of the crops, was the traditional month for weddings. This is because many ancient peoples believed that the "grand [sexual] union" of the Goddess and God occurred in early May at Beltane. Since it was unlucky to compete with the deities, many couples delayed their weddings until June. June remains a favourite month for marriage today. The surviving vestige of this tradition lives on in the name given to the holiday immediately after the ceremony: The Honeymoon.

There is an interesting relationship between one of the most important Saints and the Light. As I said above Solstice means stand still of the Sun. On a practical level, for three or four days before the Summer Solstice until three or four days after that time, unless you have a very keen sense of observation, the Sun seems to rise at the exact same point along the north-eastern horizon.

June 23 – is the Vigil of the Nativity of John the Baptist. This is the night when one can wait to see if the Sun will rise just a tiny bit South on the horizon that it did the day before.

June 24 – celebrated the nativity of John the Baptist. On the Day when you might be able to see that the Sun has risen slightly to the South presaging that the hours of light are getting shorter, the Saint whose job was to say the Light is coming is celebrated! Likewise, on the opposite end of the year, December 25th, the day when you can first tell that the days are getting longer, the Light of the World, Jesus, is born.

Midsommar is an important celebration to this day in Sweden, and I have been privileged to be part of a number of these celebrations. A Midsummer tree (stang) is set up and decorated in each town. Like the May Pole in England, the people dance around it singing songs. In ancient Sweden, women and girls would customarily bathe in the local river. This was a magical ritual, intended to bring rain for the crops. 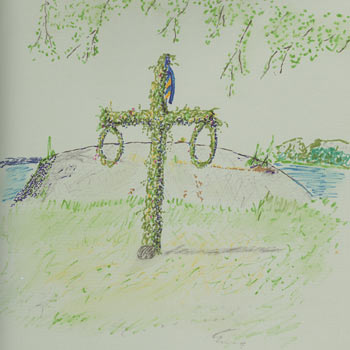 Later, on the big rock in the background, we built a labyrinth in the tradition of the coastal fishermens' labyrinths built in Sweden since the Fifteen Hundreds, and walked each day before going fishing to ensure a good wind, a good catch, and as a snare for the trickster Trolls, who would follow the fishermen in, the men would run out quickly and jump in their boats, and the Trolls would become confused, and couldn't find their way out to follow them, and cause them trouble when they were fishing.

What do you call it when you go fishing with the boat moving slowly forward, and the line out behind you? Trolling! 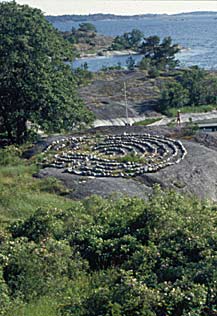 I personally have found the time around the Summer Solstice the most anarchic time of the year. It is very difficult to get people to all do the same thing in terms of ceremony as this is the peak of rugged individualism. It is a time of celebration and wild parties, but it is also a time to pause, at the height of the Light to remember that from now on, the days will become shorter and shorter until the Winter Solstice Sun begins the return once again.

Blessings to all On this day Of the Sun's Greatest power.