Mind Mirror Measurements at the Levi Labyrinth
by Stephen Bosbach 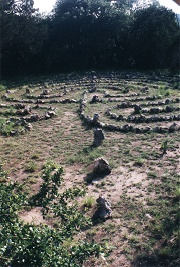 This is the view of the
Levi labyrinth from
the southwest


It was my good fortune to be able to borrow a "Mind Mirror" dual electroencephalograph back in the Spring of 1997 to compare brain wave patterns among dowsers. At a past meeting of the Armadillo Chapter of ASD American Society of Dowsers), we scheduled an experiment to measure brain wave patterns among a mixed group of individuals before and after walking a classical seven path Cretan labyrinth approximately 60 feet in diameter. The property is located on a bluff above a spring fed creek with one of the oldest Native American archeological sites in North America, the Levi Site, dating from 10,000 years ago. The Levi Labyrinth is on the property of Nick Denner, outside Austin, Texas. Nick is a dowser himself, and a designer and builder who organizes the Sustainable Building Conference each year in Austin. I dowsed his property for water and geopathic energy before his home was built on this property. It was then that the beneficial energy zones were also outlined and uses for them began to take shape.

One of these zones was a water dome that neatly fit into a clearing of trees on his property. Nick immediately suggested a labyrinth might fit. At first he envisioned a more complex labyrinth like the Chartes Labyrinth, but dowsing consistently brought him back to the simple left-handed seven path Classical Labyrinth. In the end this seemed to work the best, as the path is wide and easy for people to pass each other in opposite directions and is also wide enough for wheelchair access, which has been done at least once. The property is typical Texas hill country and very rocky. Rock between the size of our head and the size of a suitcase were man-handled by a dedicated group of friends over several days to build the Levi Labyrinth. Just by coincidence, larger than average stones were placed so that they marked the NE-SW energy line alignment, and I suggested we continue this design statement with large stones extending across the labyrinth and out to the entry. Completely after the fact, we found that this alignment also coincided with the Summer Solstice Sunrise.

Our chapter has been able to conduct a very limited experiment using the Mind Mirror to evaluate the dowsing state. We tested both experienced dowsers and individuals that were just beginners at dowsing. Previous experiments measuring the brain wave patterns of dowsers have been done exclusively with experienced, successful dowsers. I wanted a result that tested the dowsing technique more than the individual differences between dowsers, so we used a sample of individuals that had a broad cross section of dowsing experience.

What we found was somewhat different from previously reported studies. We saw a significant and consistent shift in brain wave patterns to a right brain dominance. We were expecting a more balanced brain wave pattern, as was reported in the literature, so there was little chance of our anticipation of results affecting this outcome. We also took precautions to prevent the subjects from viewing their own output to prevent biofeedback from affecting the results. A brief caveat before continuing. Getting set up for testing with the mind mirror is not a simple task and the results are prone to error. Patterns change very quickly on the Mind Mirror LCD display and it is necessary to average readings and watch for a consistent trend within a trial.

Excessive muscle movement or eye motion can also introduce error into the readings. The LCD readout on the Mind Mirror supposedly can be exported to a DOS based computer, but I was never able to get the program to work with my lap top. This would have permitted both a better display and a continuous record of the entire session. Without that option, I photographed samples of individual's results and averaged each one. This leaves much more room for error I admit, but efforts were made to choose representative snapshots of each subject's patterns. Also, the electrodes on the headband must be smeared with a conductive jell and the hair on the individual must be moved out of the way so contact can be made with the scalp. This is messy and time consuming, especially for those with long hair! A test sequence is then run so conduction with all electrodes can be verified.

In five subjects tested, two men and three women, four out of five had a significant right dominance brain wave shift following a single walk through the Levi Labyrinth. Measurements were made at a resting pulse rate before walking the labyrinth and again after walking the labyrinth when pulse rate had returned to a resting rate. All trials were run at 10 microvolt sensitivity, even though some individuals had a higher normal amplitude than others, so direct comparisons could be made between individuals. A general higher amplitude for all subjects for both before and after trials at the Delta wavelength is being attributed to machine induced error.

Brain wave amplitude changes in each hemisphere at the Beta, Alpha, Theta frequencies were not consistent enough to be considered a significant result of the experiment. Some individuals did show significant increases in Alpha and Theta amplitude, but this was not consistent across subjects. What was significant was the shift in general activity from left to right hemispheres. Only one of our subjects showed little shift in hemisphere activity, while the other four varied from a four fold to a ten fold increase in right brain activity, some going completely off the scale of the display! 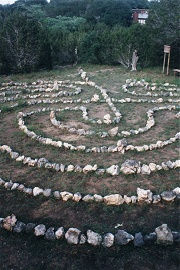 This is the view of the Levi
labyrinth from the northeast.