Deprecated: Function get_magic_quotes_gpc() is deprecated in /home/customer/www/geomancy.org/public_html/plugins/system/jhackguard/jhackguard.php on line 139
 Mid-Atlantic Geomancy - Living with the power of place

Living with the Power of Place

The past two years are what I have come to know as "Transition Years". My daughter left home and the need to keep the family housed was no longer relevant. It has been a time of refinding myself, getting to know myself alone after 20 years of parenting. Asking those wonderful questions of "Who Am I", "Where am I going", "What do I want to do with my life…" Having spent 30 years immersed in Native Traditions, both in America and Australia it felt like a good time to pack everything away and go "walk about"!! 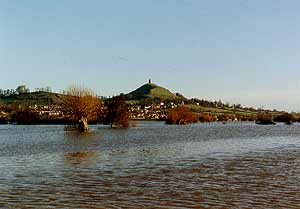 We’ve spent the last 18 years living in the orb of Glastonbury Tor, Somerset, England I have come to know and love the landscape of this strange land of Myth and Legend. King Arthur and his Knights of the Round Table made this their summer land with legends of Camelot existing at Cadbury Castle about 10 miles away. Glastonbury also claims the seat of Christianity in England, the place Joseph of Arimathea arrived from the Middle East and drove his staff into the land. It now stands as a Holy Thorn tree leaning against the winds on Wyrryal Hill. The Abbey, once the wealthiest in England, lies in ruins after the destruction of the monasteries by King Henry VIII. Every year it hosts both Catholic and Church of England Pilgrimages. Once an island surrounded by water, a sanctuary of great mysteries, myths tells us that it was the place of Gwynn Ap Nudd, Lord of the Underworld and King of the Faery.

However, I have come to know Glastonbury as a place of the Goddess, in all her forms. The Lord of the Darkness, as in Greek and Roman Mythologies, was formally the realm of the feminine. As the Patriachy took control the dark mus/goddess was replaced by a male counter-part. To come to know the Goddess one must meet her in both her dark and light aspects in order to understand the balance in all things. The Power/Spirit of Place is constant and multi-leveled in Glastonbury and I have grown to honor and respect the many aspects as they have been reflected back to me during my time here. I have spent many months facing my own shadow and delving deep into my own inner darkness to find the light. By travelling this path I have come to know and love myself. And I have come to the conclusion that Glastonbury is a place of Pilgrimage, no matter what your belief system, and that living here permanently is not what the place is about.

Time to go "walk about". 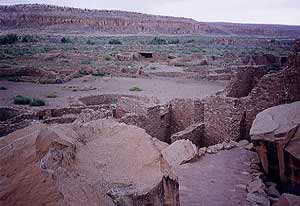 I began my journey in New Mexico where the landscape is vast and the skies even more enormous. The arid rocks and sagebrush go on for endless miles. I felt totally exposed and vulnerable in the high mountain desert. But the land is alive with Spirit and the Ancestral energies. The Hopi and Navajo peoples have scratched a living for what seems like eternity with very little change in their lifestyles to this day. To do ceremony and a Vision Quest in this landscape was a powerful experience. And I have come to love the place and respond to it with great respect and feel, like Glastonbury, it is a place of pilgrimage.

My journey lead me further north and east in the United States into Vermont. Abounding in trees, mountains and rivers, the place is alive on a very visible level. My intention was to spend a winter under snow - something I had never experienced before. I was looking to spend my birthday (winter solstice) in retreat and total silence.

I first visited this part of the world in 1985. I had a dream which was to become manifest when I spent time learning from a Seneca Indian Grandmother - Twylah Nitsch. The time spent with her was to lead to a significant change in my life. Up until that moment my spiritual teachers had all been men, teaching from a man’s point of view. I was becoming a great warrior but not a very happy woman!!! It was becoming obvious to me that men and women have different paths to follow and I needed to find the wise women to help me with mine.

I learned that I had to move away from the ‘doing’ and into ‘The Silence’.

Using my physical and feeling body to dowse with rather than a pendulum.

In going ‘within’ I had to pass through many obstables that made being still an impossibility - old childhood experiences and patterning, no longer serving me and difficult to face. The more I faced them, the more inner peace I discovered and the more I could trust in my own inner guidance. 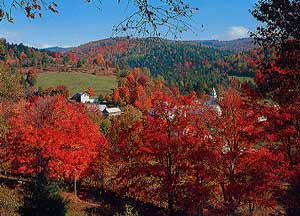 Vermont is lush - in summer it’s green and vibrant, in autumn flame red and vital, in winter white and quiet, and in Spring brown and muddy. It abounds in forests, mountains and glorious rivers. The Earth Mother Goddess is alive and well. The nature of the seasons and circle of the year I could see and feel in a way which lives deep inside of me. Nature is disappearing fast from England as more and more houses are built and towns expand out into the green fields. Our wilderness has almost completely disappeared. Our lands are steeped in histories and cycles of time, over and over on the same spot. The natural nature of place lies buried deep beneath them. To climb a mountain in Vermont and to know that no human has ever ‘lived’ or ‘changed’ that place brings an extraordinary connection with nature. And the natural cycle of things, rather than the human cycle of things. The Spirit of Place is huge and strong. 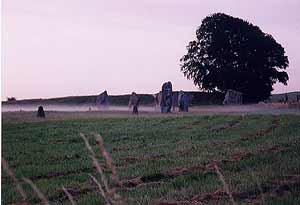 In England the energy of Place was recognised by those who built the stone circles (maybe they saw our future better than we see it ourselves…!) They laid down the cycle of things. They understood the movement of the sun, moon and stars in relation to the Earth and built these alignments into their Circle. Over the years I’ve spent many a long night in stone circles throughout England and Ireland experiencing these very alignments and taking into my own being the energies of these times.

To experience these energies in the Wilderness of Vermont has taken me deeper into other realms. The elemental energies are more alive and the sense of celebration resounds through the landscape. The sense of sharing nature with more realities than the one we see on this physical level is present. The trees themselves speak, the wild animals are ever present and the elemental/faery world is within grasp. My world expands and I feel energised and held.

I have learnt that Spirit of Place exists everywhere and that being in Sacred Space is a state of being.

There are always helpers seen and unseen to help us along our way, it is just a question of being still enough inside to feel them. Being in the wilderness reminds me of this and teaches me to look within and find that stillness, especially when my ordinary mundane life is so busy and filled with every day noisy activities.

My journey has taught me to live lightly upon the earth. To recognise that wherever I am, there are helpers and guides - I just need to be still enough to receive their help. I am part of the new as I am also part of the old. To connect with nature is tapping into the grid; it gives energy and nourishment and is vital to good health and well being. Especially now when our culture is moving faster and faster and conspiring to cocoon us from every nuance of nature, be it rain, sun or wind.

It’s good to take time out and go walk about, explore this amazing planet we live on and the treasures that abound if we just put ourselves in the right state of being - The Silence.