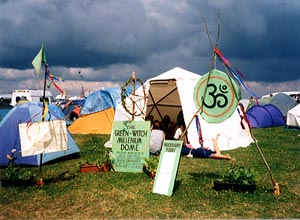 My partner and I were asked to create and co-ordinate the Spirit Zone at the Big Green Gathering this year, and part of our job, as well as hiring speakers on the topic of Green Spirituality, was to actually manifest the Spirit Zone along the avenue leading to Green Henge, the new stone circle built in the ninety’s by John Martineau.

I enclose a site map to help explain this set-up. We felt that the site layout put us in the position of the 6th chakra of the Festival, leading to the Stone Circle as the crown.

So, what to do? After much thought about:

We made a big banner to announce the entranceway to the Avenue (and the camping field!) as the Spirit Zone*, and a large Green Witch (hazel and canvas) Being, to stand outside our workshop dome.

And finally, we marked the Avenue with medicine shields and green man/witch faces, hanging from hazel pole supports, every 15 feet/5 meters or so, with glittering ribbons hanging from them. Each shield was double sided, with symbols from lots of spiritual paths painted on them, both conventional, such as the Celtic cross, and unusual, like the Eye of Ra, and the Saturn square (magic square).

So as people walked along, they passed through the energy of many faiths, from all over the world, and also passed the gaze of Mother Nature Herself. 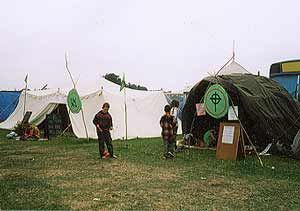 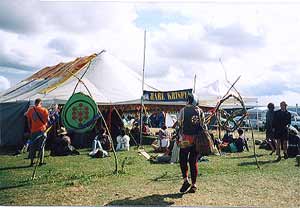 We shared the Avenue with the Buddhist café and temple, the Celtic Christians bender and the Hare Krishna café and music scene, and all got in very well.

Chanting filled the air from morn to night, each having some time, so "Earth Mother," Shiva, Krishna and Christ all had a chance to be heard. It felt as though our geomancy had worked very well, and many commented on the lovely atmosphere, leaving the main site, with its hurly-burly energy, and returning to the peace of the stone Circle field.

It all took a month or two to make, a day to put up and a day to take down, a very worth wile exercise in temporary geomancy!

Oh, and another piece of temporary geomancy is that each year a beautiful labyrinth is made on site, with chalk or sand, by little Tess from Glastonbury way, which is also very popular, and well walked. These pieces may not be permanent on the land, but many take their influence home to savour.