Geomancy explores the realm where human consciousness meets and dialogues with the Spirit of the Earth. It empowers the harmonious interaction between person and place, and can enhance spiritual growth. 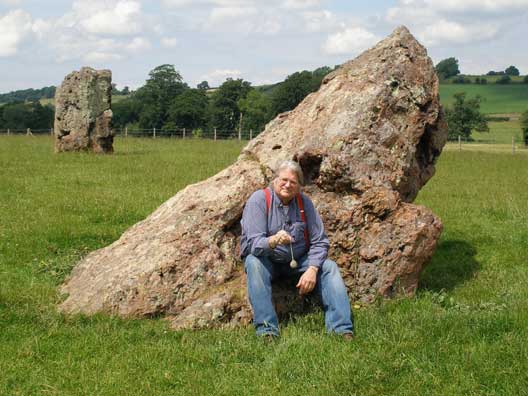 I have been a dowser and student of geomancy since the late fifties when my mother taught me to locate the pipe that brought Town water into our home in Greensboro, Vermont.  The man who taught her how to dowse was Terry Ross, and he later became my mentor as in dowsing and seeking the Earth Energies.  The major turning point happened in 1969, when I went to a site called Claendar II in central Vermont to see the Summer Solstice Sun rise from an astronomical platform which is aligned with a standing stone, and the sun rolls up the side of a hill behind it on the horizon..  I never saw the Sun rise that morning because I was in the Calendar II Chamber which is oriented towards the WInter Solstice sun rise, and I had what can only be called a mystical experience when over twenty white-robed people suddenly appeared inside the chamber, and none had come through the door at the front of the chamber!  (You can read more of this pivotal event in my book Spiritual Dowsing.

In any event, This started me on a path that I have been following for the past forty-five years learning to be a geomancer.  I have just finished a long project I call "Geomancers I Have Gnown," and I invite you to join me for avisual tour of the geomancers who have influenced and directed my life.


Using Material From This Site
Please understand that all material - images, graphics and text - on Mid-Atlantic Geomancy is copyrighted ©; however, I am open to allowing you to use certain graphics and small bits of text IF you ask This email address is being protected from spambots. You need JavaScript enabled to view it. first, and if you credit the source and create a link with the material you use back to Mid-Atlantic Geomancy (MAG) .  I might wish to ask for a small charge to cover the initial costs of producing the image and/or for the on-going costs of this web site. There is a wonderful website called TinEye that crawls the net looking for similar images. You might want to check it out.