Aligning People to Place to Purpose

Peter's early exposure to stone that holds the memory of life, began while quarrying dinosaur footprints as a lad with his father in New England. A teenage revelation that his name translated to Rock of the Field led him to a fascination with other rocks in the field, like Stonehenge. As a classically trained stone mason, he studied the patterns and reactions of stone. Peter is a life long student of comparative religion and all things geographic. He was also a player in the conscious community movement in the 70's and 80's. His unique vision of the world has evolved into reading the patterns of local memory lines as they coalesce into large-scale patterns worldwide.

Peter's seminal work of synthesis on North American energy fields, Gaia Matrix, was published in 1999 (that's Sig on the cover flying on a boulder over the hills of Vermont). Since that time, Peter's particular brand of geomancy, known as FIELD Geometry, has continued to evolve from community to global scale. Mapping of the Unified Field as embodied geometrically in the natural and cultural landscape provides a two-dimensional perspective on inter-dimensional reality. This window into a higher perspective integrates an awareness of place into new coherent patterns of community consciousness.

FIELD Geometry has been and is being applied in large-scale ceremonial Medicine Wheels in North America for regional Earth healing ceremonies. Potential exists for these patterns to release the entrainment of war, and to seed intentions of social and environmental harmony into our planetary consciousness, as shown in the following examples. 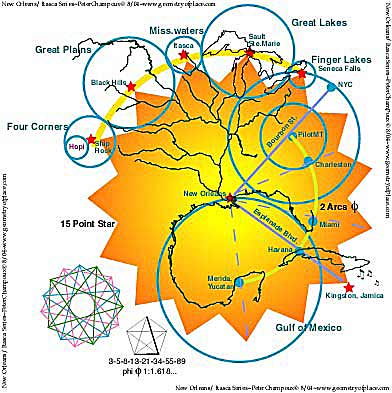 New Orleans the center of a 15 point FIELD Geometry. It's geomantic impulse radiates throughout the Mississippi River Bioregion and links with the sacred sites of indigenous Americans. New Orleans is also a point on a global civilization alignment marked by the Mississippi, Nile, Euphrates, and Yangtze River deltas, and the headwaters of the Ganges River. This FIELD study indicates the karmic relationship between war in Iraq and hurricane Katrina. Geomancy reveals how an impulse, no matter the scale, has its affect on the 'FIELD' in total. We are all relatives!

Help facilitate the dissemination and development of this knowledge by funding a community survey, his research in general, or his next book–which is pouring out his ears.

harmonious placement of structures on the land:

For more information on funding a study of your community, city, region, country, or continent visit the Web Site