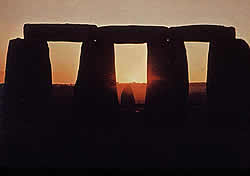 Since at least the Neolithic Revolution, with the "invention" of farming, cultures all over our planert have been creating sacred spaces. From the builders of Stonehenge and Avebury to the Great Pyramids, Mayan Temples, Angkor Wat in Cambodia, Solomon'e Temple, and the builders of the Gothic Cathedrals in the Middle Ages constructed their sites using sacred geometry, a clear interest in especially horizonal astronomy, and the Earth Energies - among other things to enhance the possibility of connection with the Spirit World.

Geomancers (Geo - the Earth, mancers people who used divination - like dowsing) were the architects of these sacred spaces - Spiritual Set Designers. The following section of MAG visits some of the sacred enclosures they designed.

Here is a short video of a talk on Sacred Spaces in the Netherlands I gave at the Megalithomania Conference in Glastonbury in 2012.