Glastonbury, in the county of Somerset in south western England, has been a place of sanctity and pilgrimage for at least several thousand years. Glastonbury Tor (just called 'the Tor') with its single tower, dominates the area sticking up well above the flat Somerset Levels, which are at, or a bit below, sea level.

It is not sure when the Glastobury area was first occupied. The Sweet Track (dated 1380 BCE) the oldest marsh walkway known is not far away in Mere. The first people we know occupied Ynys Witrin, or the Isle of Glass, were the Celtic Druids. It is said that Glastonbury (at that time a small cluster of islands rising above the submerged Somerset Levels) was the location of one of three Druidic perpetual choirs. These eternal choirs made music twenty-four hours a day, three hundred and sixty five days a year. They were literally enchanting the land.

According to tradition, in 37AD, Joseph of Arimathea, the man who provided Christ his tomb, came here. He set foot on Ynys Witrin on Wearyall Hill, where he planted his Jerusalem Thorn staff and rested his feet from the long journey. The staff took root, and it is said that a scion of the tree grew on Wearyall Hill until fairly recently.

Glastonbury, as seen from the HolyThorn on Wearyall Hill,
is in the upperleft-hand corner. The Abbey is below
the first 'Y' on the bottom branch. On the right horizon,
Chalice Hill is just to the left of the Tor.

Bligh Bond at the Glastonbury Abbey

The Lion's Head under the Glastonbury Tor 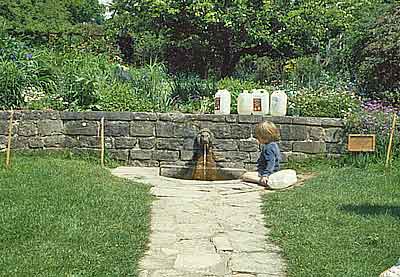 The Chalice Well is nestled at the base of the Glastonbury Tor. You can see the tower on the Tor through the trees. Below the tower is the Lion's Head, where pilgrims are welcome to drink of these waters. It is always a place of special prayers and personal ceremony. The tree above and to the left of the Lion's Head is a holy thorn, scion of The Holy Thorn Tree (Crateagus Monogyna Praecox) that Joseph of Arimathea brought from the Holy Land. It is a special thorn because in late October and early November, around the time of Samhain, the Celtic time of death and rebirth, this tree, and others like it around Glastonbury have both berries and flowers.

In addition to the Tor, the Abbey and Chalice Well, one of the major icons in Glastonbury is the Holy Thorn on Wearyall Hill. The mythtory tells us that when Joseph of Arimathaea arrived in the Land of Avalon after Christ's crucifixion, he rested his feet on this hill, surveyed the Scared Earth before him, and leaned on his Jerusalem Thorn staff which took root where he stood. It grew there until the mid-seventeenth century when one of Oliver Cromwell's men cut it down in that rampage to destroy all icons and other sacred images and objects. (I find it quite ironic that two different men named Cromwell have come to this town and destroyed much of our spiritual heritage - Richard Cromwell played a major role in the destruction of the Abbey in 1539. Oliver's men came just over a hundred years later.)

Fortunately, there were/are a number of cuttings of this holy thorn growing here in town - in the St. John's Churchyard, in the Abbey and at Chalice Well Gardens. In the early nineteen-fifties, a new holy thorn (which came from a cutting from one of these trees) was again planted on Wearyall Hill, and it has stood there for the last sixty years as a living symbol of the sacredness of Glastonbury. 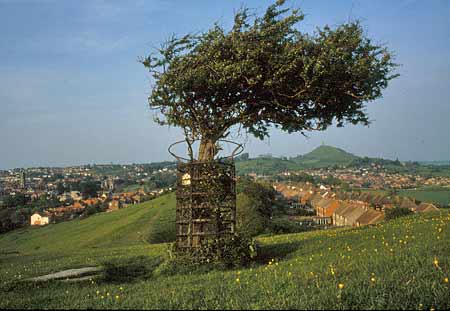 The Holy Thorn
With the Abbey (to the left), Chalice Hill and the Tor (on the right) in the background

Sadly, on 9 December, 2010, when Karin and I returned from The Nethelands, we heard that some AS _ H_ LE (please excuse my bad language, but I can not find a more appropriate description) had sawed of all of the limbs of this wind-blown holy relic! What could have possibly have motivated anyone to commit such a senseless act of desecration? Fortunately, the metal fence around its base kept the vandal(s) from cutting down the entire tree, and there is talk that pollarded trees many times grow back stronger than before, but that is beside the fact. Glastonbury citizens from all walks of life are mourning this mindless act.

We still do not know who committed this travesty, but it has brought the town together as everyone is appalled by this dastardly deed. So a good thing has come out of a dark dark day. We trust that new branches will sprout, and the Holy Thorn will renew itself. 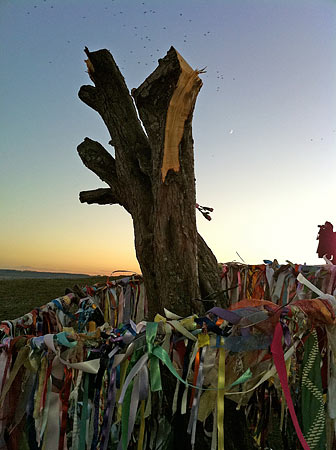 (Notice the starlings above what is left of the Holy Thorn.
They come to the Somerset Levels in their millions at this time of year.

Running up from St Michael's Mount near Penzance in South-Western Cornwall, there is a narrow geomantic corridor that runs for a few hundred miles to the North-East through a number of significant sacred sites including the Tor and the edge of the Avebury stone circle, and a large number of sites and churches dedicated to St Michael. With a level horizon, this alignment points to the rising Sun on the Celtic Cross-quarter day of Beltane (May Day), and the setting sun on Samhain (Halloween). 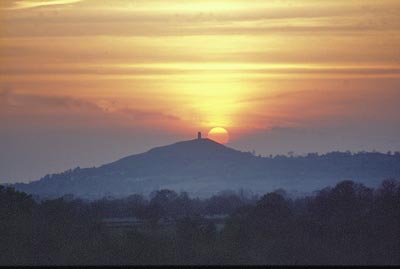 John Michell first proposed this 'Michael Line'. Hamish Miller and Paul Broadhurst dowsed it and found that it was actually two sinuous lines - one was yang, the other yin. They called them the Michael and Mary lines. This geomantic corridor, and the Michael and Mary lines converge on the top of Glastonbury Tor. It is at the top of the Tor where Glastonbury connects with the rest of the world.

This connection can be felt at all times of the day or night. One of my favourites is in the evening at Sunset. Many pilgrims walk up the Tor at that time. The entire town benefits from the energies of this magical sacred space, and it radiates this spiritual awareness, love, readiness for change and openness to alternative thinking and living out into the rest of the world. 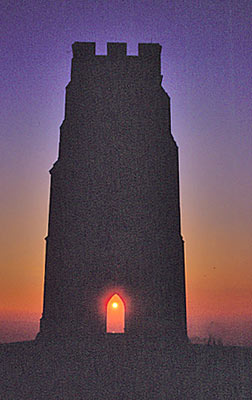 This is the end of our MAG tour of Glastonbury.

There are a number of other sites that focus on Glastonbury. Here are some:

Isle of Avalon is the Glastonbury Alternative website. It contains numerous web pages from "The Glastonbury Archive" and "The Knowledge Bank," both resources Glastonbury ideas much by Glastonbury authors, to a guide to the millennium, several guided tours 'round the Land of Avalon, a good astrology section, and "Avalon Articulates" (an e-zine), and much more. IMHO, the best site for alternative Glastonbury.

Mystical-WWW is Mell Paul's wonderful site. This has a section is devoted specifically to Glastonbury - all the sacred sites, a history, and a special emphasis on Arthurian connections. This has much solid information.

Welcome to Glastonbury. A good site for when you come here for the first time. Good on the practical stuff - how to get here, where to stay, shopping, business directory.