Please Note:
It is assumed that the reader of this section can dowse with L-rods.
If you can't, check out our Dowsing Page. 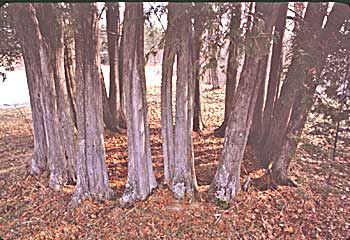 An apparently natural circle of cedars over a dome of water.

Our re-awareness of the energies of the Earth has re-emerged slowly in the twentieth century. In the 1920s German dowsers found 'Krebs' Houses - places where people got more cancer than their neighbours. Dowsers found underground veins of water Crossing under these houses and not under their neighbours. Also, in the 1920s Alfred Watkins of Herefordshire, England, found that ancient holy sites lined up in straight lines. He called these 'leys' and determined that people from the Neolithic, through the Bronze and Iron Ages, well into the Christian era in Britain, located their holy sites on straight alignments with other holy sites. Many times these holy sites derived from extremely different ages, millennia apart. In the 30s, Reginald Allendar Smith, just-retired Keeper of the British and Egyptian Collections at the British Museum, wrote in the pages of the British Society of Dowsers' Journal that he found these same veins under stone rings and other Neolithic sacred sites. Terry Ross, past president of the American Society of Dowsers (ASD) brought the notion of dowsable leys to the United States in the late 1960s.

Before I begin to tell you how I see the Earth Energies, I must tell you of an something that I have been working on for over fifteen years now. I call it "Sig's Hypothesis Number One." (I now have have an Hypothesis Number Two that has to do with Neolithic chambers with elevated horizons and archaeoastronomy, but that's another story.) My Hypothesis Number One is: "Even if they were trained by the same teacher, when dowsing for intangible targets (like the Earth Energies), it is quite probable that no two dowsers will ever find exactly the same thing."

There are several ways of seeing this reality. Between one-thousand BCE and one-thousand CE, there were a number of men (sorry, female readers) who saw God, Their names were Moses, Confucius, Lao Tzu, Buddha, Krishna, Zoraster, Jesus and Mohammed. There is no doubt in my mind that each of them saw their Maker, the One - yet they each came back and told different stories! Now, let's take just one of them - Jesus. All Christians see their way to God through one door: Jesus, yet there are Greek Orthodox, Anglicans, Catholics, Jehovah's WItnesses, Evangelicals, Gnostics, Fundamentalists, Methodists - the list goes on and on. Each denomination has chosen to get to God through Jesus, but in a slightly different way. If you want to be a Methodist, you have to agree to see it how John Wesley did - you stand here, kneel at this point, etc., etc. Each Christian sees their way to God through Jesus slightly differently.

What you see depends upon where you stand, your sacred point of view - as a wonderful teach of mine, Grandmother Twylah Nitsch, Wolf Clan Mother of the Seneca told me. So we all see the Spiritual differently. It depends upon what your teacher taught you to see, your level of consciousness, what you are ready to see, and probably a number of other factors as well.

What does this mean in terms of dowsing the Earth Energies? We're all going to find something different, and that is not only ok, that's the way it is.

This is anathema to scientists, but it is reality for dowsers.

Dowsing is not a tool of science. Another word for it is "divining." It is a spiritual tool, a way to "see" the other side. So how can you find it to be a useful tool when dowsing intangible targets like these Earth Energies if no one else finds what you find?

I would suggest that you listen to as many dowsers as you can who have been working with these energies, and then, find what YOU find. Look for repeating patterns at sacred sites. This will be your clue that you are on the right track. Listen to others, then decide for yourself.

How This Blind Man "Sees" the Earth Energy Elephant

These are the two major earth energetic targets that I would encourage you to look for: primary veins and domes of underground water, and energy leys - a six to eight foot wide beam of yang energy that sometimes accompany leys, alignments of holy sites. I have chosen to focus on these two energies because they are the closest to the physical. While I would not recommend drilling for water in the centre of a sacred site, if you apprentice yourself to a good water dowser, you can get to gnow the feel of this liquid gold. Also, as many times (but not always) energy leys run concurrently with Alfred Watkins' leys (alignment of holy sites), again, when you find a ley, you can dowse to see if there is an accompanying energy ley. (Remember, not all leys have energy leys - it sounds like o contradiction, but I have found it to be true.)

So, having said that, this is how this blind man sees the Earth Energies:

Now that you can get a dowsing response, it is important to be able to find underground veins of primary water. The best thing to do is to link up with a dowser. You can do this through the American Society of Dowsers or a dowsing organization in the country where you live. You can walk by streams, look for places where water seeps in and then trace that vein away from the stream. The best is to apprentice yourself to a good water dowser for a while. The ability to find water is perhaps the most important skill any dowser can have, not only for this purpose, but for health reasons, not to mention the critical shortage of good drinking water our planet is suffering with right now.

Many animals are attracted to water. Usually big ant-hills are located over Crossings of veins of water. Walk around the ant-hill and look for the veins with your L-rods. In New England these veins are usually no more than six inches wide - usually less. The cedar trees in the picture above, growing in a circle, show a dome underneath. A dome is an up-flow of primary water (which comes up from the bowels of the Earth carrying the water which then feeds the veins). 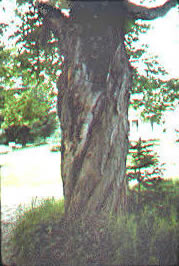 When veins of underground water cross each other (one above the other), they create a spiraling energy. Sometimes, if planted on top of such a place, a tree picks up that cork-screwing energy. You can see it clearly here, and you will find several veins of water Crossing under this tree. Dowse it yourself.

On his website, Dragonlines, Patrick MacManaway has an excellent discussion of geopathic stress - something that can come, from among other things, spending a lot of time over these veins of undergroud primary water. 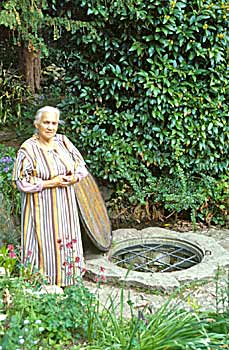 Holy wells are a good place to dowse for veins of primary water. To the left is Dewasenta, a Seneca Onondaga Eel Clan Mother who came to visit me when I was living in Glastonbury in the mid-eighties.

This holy well contains chalybeate - full of iron - so it leaves a red stain wherever it flows. It is holy to Goddess. 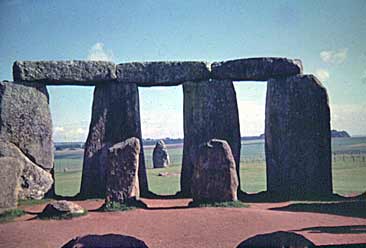 Heel Stone ley at Stonehenge. The Heel Stone is in the
center at the back

Energy leys are more difficult to find than underground water-veins - especially in the USA. To the right is an obvious one - the major axis of Stonehenge in Britain. This is the alignment of the Summer Solstice Sunrise. Find a sacred site near you. If you don't know of one just now, don't worry - put out your feelers. Make it your intent to locate one! When you are ready, a site will come to you. Where is the centre of the site? Try dowsing there. Look for underground veins of water. Look for energy-leys - 6-8ft wide beams of yang energy. You might even find several energy-leys Crossing at the centre. Water veins and energy-leys are manifestations of the female (yin, water) and the male (yang, energy-leys) respectively. These centres are places where the yin and the yang come together.

In the first several decades of the twentieth Century, first Norman Lockyer, then Alfred Watkins began to find perfectly straight alignments of ancient holy sites. Lockyer found a ley/alignment that ran from a Bronze Age round barrow within sight of Stonehenge to the north, hit the edge of Stonehenge (many leys do this - hit stone rings a glancing blow instead of going through the centre), and then on to an Iron Age Hill Fort called Old Sarum.

How could this pattern of building holy sites continue for thousands of years, culture after culture, and we haven't heard about it. It's not in the written record!One obvious answer is that they were burning people who were in to things like the Earth Energies, so, while it was in the oral tradition, no one was foolish enough to write it down.

But now we come to a very important point. At the top of this page, I spoke of "Energy Leys" - six to eight foot wide straight beams of dowseable yang energy. Many people have made the assumption that Energy Leys and Watkins "Leys" are one and the same. THEY"RE NOT!

While it its true that many times, the run concurrently, they don't always do, and the Lockyer ley above is a classic example.

While it runsin a straight over a number of miles marked by six different historic and prehistoric monuments, there is no energy ley running along it!

You can check this yourself. Get out your pendulum, and do the tuning in process I described in the section on dowsing, then go to the picture of Stonehenge and the Heel Stone at the top of this page. Make it your intent to find an energy ley, and with our pendulum in the search position, run your finger horizontally across the image. When you get near the Heel Stone and the centre of the picture, your pendulum will start to gyrate, thus showing you that you have found an energy ley.

Now go to the picture of Old Sarum with Salisbury Cathedral on the horizon. Again, ask, if there is one, to find the energy ley flowing from Old Sarum to the Cathedral. I don't find one.

One final point. This might sound pedantic, but I am never sure what someone means when they speak of a "ley line." Is it the alignment of sites? Watkins never used this term - he called them, as I have, leys. And as there is a difference between leys and energy leys, I just do not know what people mean when they say "ley line." So I don't use it.

For me, these underground veins and domes of primary water and the straight energy leys are the Earth's acupuncture life force system, and standing stones, as Tom Graves pointed out, are Earth Energy acupuncture needles.

There are many different kinds of earth energies. They manifest in different ways to different dowsers. Sig's Hypothesis Number One is: "Unless they were trained by the same teacher, it is quite probable that no two earth energy dowsers will find the same things at a sacred site". Needless to say, this frustrates scientists, but it is the way it is on the spiritual path.